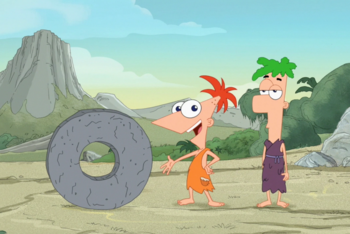 It Will Never Catch On!
Advertisement:

In any story that takes place in 1 Million B.C., you're going to see someone invent the wheel. Common fodder for It Will Never Catch On. Often the wheel is some shape other than round, indicating that that iteration is probably an Obvious Beta.

Most examples of this trope are guilty of some form of Artistic License – History and/or Anachronism Stew, since the wheel was invented later than most people think — around 6,000 years ago, just about at the border between prehistory and history proper. This is particularly evident when The Discovery of Fire is shown in the same setting, despite predating the wheel by 400,000 years in Real Life.

Nothing to do with Reinventing the Wheel.