Western Animation / Pinky and the Brain 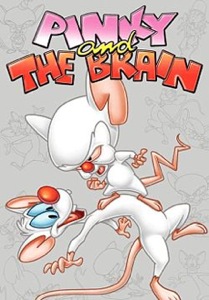 One is a genius, the other's insane...
"Gee Brain, what do you wanna do tonight?"
"The same thing we do every night, Pinky — try to take over the world!"

An Animated Series about a super-intelligent, genetically-altered lab mouse who enlists his halfwit roommate (read: the other mouse in his cage) into his endless quest to Take Over the World. Each episode saw The Brain devise an elaborate, improbable scheme for world domination, only be foiled in the end due to some unforeseeable twist of fate, Pinky's bumbling or occasionally his own blundering arrogance. On one or two occasions he actually succeeded in taking over the world, but with some kind of unacceptable side-effect that sent him back to the drawing board. By contrast, many episodes had his schemes barely even getting off the ground, and the story centered around his attempts just to get the first step going.

Originally a recurring skit on Animaniacs, the characters proved hugely popular and were soon given their own show. It tried to be as keenly satirical as was possible within the format of an afternoon children's cartoon. However, this did tend to remove it uncomfortably far, at times, from the notion of world domination — one can imagine the writers scratching their heads and trying to figure out how writing a Broadway musical could possibly help The Brain take over the planet (ultimately, most of the later plots are money-making schemes meant to fund the next scheme). Though it should be noted that due to said mature humor, the WB actually gave the show a primetime slot for a time during their Sunday Night runs.

Alas, due to Executive Meddling from Steven Spielberg, the show was eventually turned into Pinky, Elmyra & the Brain — curiously premiering when several episodes of the original still had yet to air and thus briefly airing concurrently. See that page for more information.

The duo returned in 2020 as part of Hulu's Animaniacs revival series - notably without Elmyra.

Pinky and The Brain provides examples of:

The entire episode parodies this trope, with the new guy Larry, being shoehorned into the intro and episode, as a response to executives wanting to add a third character to the show.

Example of:
Remember the New Guy?

The entire episode parodies this trope, with the new guy Larry, being shoehorned into the intro and episode, as a response to executives wanting to add a third character to the show.