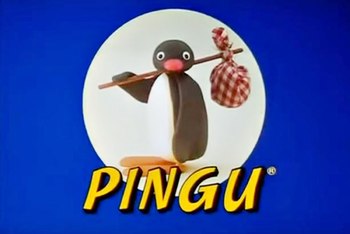 Pingu is a Swiss stop-motion Claymation children's television series created by Otmar Gutmann, produced by The Pygos Group, and distributed by HIT Entertainment and Cosgrove Hall. The series depicted the adventures of the titular character Pingu, a Bratty Half-Pint little boy penguin somewhat echoing Dennis the Menace (US) living at the south pole.

Each episode of the show was typically between five to six minutes in length, and were consequently fairly barebones in terms of plot; the general trend in them include Pingu encountering a problem or getting into trouble in some way, and then the issue being resolved. A typical plot of an episode would be Pingu having his ball stolen by one of his friends, getting upset about it, and then the friend feeling sorry for him, making up with him, and them then sharing the ball. Since this was the case, networks airing the show compensated by compiling three to four episodes as one block, which, if done twice more, equated to an hour's worth of Pingu airtime (excluding the numerous amount of commercial breaks).

Characters aside from Pingu in the series included his aforementioned friends, Pingg and Pingo; a seal named Robby, whom was his best friend; Pingi, his girlfriend; Pingu's mother and father; and his little sister Pinga.

A quintessential part of the show that added to its international appeal was the lack of an established language for dialogue between characters. A nonsensical "Penguin Language", which was more or less a composite of bits and pieces of many different languages, was instead used.. This, combined with the simplistic plots and thoroughly entertaining tongue-in-cheek body language, a viewer, regardless of race, ethnicity, or nationality, hardly needed dialogue in order to discern what was happening. However, a English-speaking narrator was slapped onto the show when it was exported to Canada, and subsequently, the British imported the Canadian episodes and bowdlerized it even further.

Another notable aspect of the show was many episodes of it being decided as containing objectionable subject matter (predominantly in the form of Nightmare Fuel) and consequently being banned in some countries. See below for more details...

The series lasted for six seasons constituting 156 episodes between 1986 and 2006. The original series lasted from 1986 to 2000, was then on hiatus for three years, and then had a reboot in 2003 lasting until 2006. The series had another CGI animated reboot titled Pingu in the City