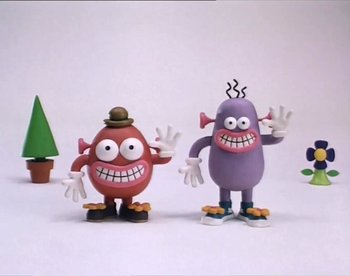 Pib and Pog is a series of short films from Aardman Animations (the Wallace & Gromit guys).

The title characters are two blob creatures with huge smiles acting in a white void amidst minimal props. In the first short, a cheerful narrator asks them what they've been up to. Pog produces a shell he found at the beach which Pib desperately wants to see. Pog complies by shoving it onto Pib's head, nearly suffocating him. Pib then walks off and reenters with... a gun, and shoots a hole in Pog's belly. What follows is the purest example of a Subverted Kids' Show as the characters proceed to take escalating acts of violence against one another.

In other words, this is anything but Wallace and Gromit.

Tropes appearing in Pib And Pog.