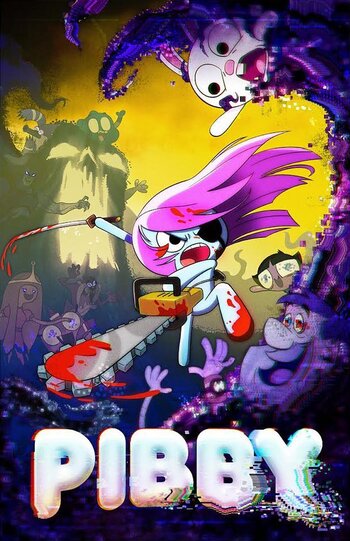 "I discovered whole other worlds that are nothing like mine. And we're all under attack."
"Pibby is ripped out of her safe, preschool world and thrown into unknøwn lands. She has to grow up, 💜LEARN💜, and become a b∆dass to stop the cartoon A₱⊙C⋀L¥⍴$∑//////////////////////"
—Official YouTube description for the trailer
Advertisement:

Pibby (also known as Come and Learn with Pibby! or Learning with Pibby) is an action-horror metafictional pilot uploaded to Adult Swim's YouTube channel on October 30, 2021. Its creator, Dodge Greenley (known for his work on Nickelodeon shows such as Sanjay and Craig and Pinky Malinky), has stated

that he plans for it to become a full series, but that any further development hinges on viewers' reactions to the initial short, which doubles as both proof of concept and a trailer.

Pibby is a cute little girl who stars in her own educational cartoon for preschoolers (Learning with Pibby), learning about spelling and caring with all of her cuddly animal friends. This all comes to a screeching halt when a glitchy, eldritch blob suddenly invades her world, consuming and absorbing all of her friends. Just as she is about to be eaten herself, Pibby finds herself in the credits of her own show.

Soon, she finds herself traveling to other worlds – that is, other cartoons (both real and fictional) – and discovering that they are also under threat of being assimilated into this nightmarish abomination. While her newfound allies doubt that they'll be able to deal with such an apocalyptic problem, Pibby holds out hope that there's a way of beating back the darkness – but before then, she'll need to learn a lot more than she bargained for.

The trailer/short/pilot (titled "Come and Learn with Pibby!") can be seen here

"Troping with Pibby, troping is so fun!":

🎵 Learning with Pibby! Learning is so fun 🎵
🎵 We like to spell and we love to hug 🎵

Played for drama. In the trailer, Pibby promises BunBun that she'll always keep him safe. Smash cut to the next shot with BunBun being killed by the glitch, with Pibby struggling to save him, leaving her helpless but to watch in horror...

Alternative Title(s): Learning With Pibby, Come And Learn With Pibby

Played for drama. In the trailer, Pibby promises BunBun that she'll always keep him safe. Smash cut to the next shot with BunBun being killed by the glitch, with Pibby struggling to save him, leaving her helpless but to watch in horror...