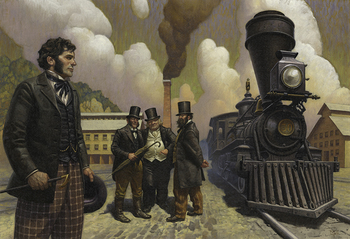 Morton: How does it feel sitting behind that desk, Frank?
Frank: Almost like holding a gun... only much more powerful.
— Once Upon a Time in the West
Advertisement:

The owner/president/majority stockholder of a large and successful railroad. In the latter half of the 19th Century, owning a major railroad was a great way to get and stay rich. Not just because of fees for carrying passengers and freight, but land grants giving the railroads large easements on either side of the tracks, which could then be rented out or sold. This trope is largely a North American phenomenon even though Great Britain and continental Europe saw their share of private railroads built with domestic capital. On the continent, many private lines were nationalized for national defense reasons or built by the government in the first place. In Latin America, capital for railroad ventures often came from the same North American (and sometimes European) rail barons as those in North America. They could - and did - do with governments of some "Banana Republics" as they pleased, so great was their power.

In fiction, the Railroad Baron will be dressed ostentatiously, with a gold pocket watch, fat cigars and other expensive accessories. They didn't call it the Gilded Age for nothing. Most of them will be middle-aged or older, and an expansive paunch is common. (One theory is that this stylized image was a mirror of their enormous and overbearing economic presence. Another theory is that it's just that most of them were rather fat, in a time when most people were lean from expensive or inadequate food.)

Because Aristocrats Are Evil, even "honorary" ones, Railroad Barons will usually be treated as an antagonist in stories. They'll have a Screw the Rules, I Have Money! attitude, hire the Pinkerton Detective to deal with anyone who crosses them from Outlaw to union organizer, try to drive the Determined Homesteader off of his property so he can buy it up cheap, and arbitrarily change planned rail routes for maximum personal profit or to fulfill a vendetta. In short, an early type of Corrupt Corporate Executive, closely associated with the term robber baron

. If his villainy is particularly exaggerated, this archetype may also overlap with Dastardly Whiplash.

Historically, they were expected to be generous with their money once they got it (and some of them actually were); but even the generous often used these methods to acquire the money that they later gave away. What did them in eventually was the mass availability of the "horseless carriage" and billions upon billions of government subsidies for it.

About the only time you'll see a Railroad Baron being treated neutrally is in stories about the Transcontinental Railroad being joined up.