Series / The Adventures of Sherlock Holmes and Doctor Watson 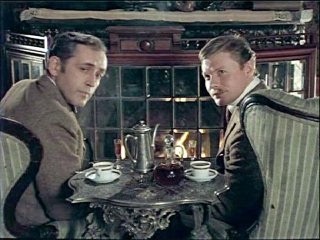 The Adventures of Sherlock Holmes and Doctor Watson (Приключения Шерлока Холмса и доктора Ватсона) is a series of Sherlock Holmes adaptations made for Soviet television between 1979 and 1983, plus a theatrical feature in 1986. It is commonly known as "Russian Sherlock Holmes" in Western fan circles, although the Baker Street scenes were actually filmed in Latvia. It stars Vasily Livanov as Holmes and Vitaly Solomin as Dr. Watson. All episodes were directed by Igor Maslennikov.

The series is generally true to the Doyle stories, but is more of an Adaptation Distillation than a straight page-to-screen conversion. The combination of the Victorian British setting and the Russian sensibilities of the creators give the series an interesting blend of cultural influences. Livanov, Solomin, and many of the supporting actors give memorable performances - Livanov was even awarded an Order of the British Empire for his portrayal of Holmes - and the opening theme

is insidiously catchy. Among Sherlock Holmes fans aware of the series, it is still considered one of the, if not the, pre-eminent adaptations of Conan Doyle's work. Another point in its favour is that it is not as political as some Soviet productions were - Holmes and Watson are not portrayed as proto-Marxist-Leninists, launching into Author Filibuster, and despite the rich opportunity to do so, the inequalities of Victorian life are not presented as flaws of modern-day capitalism. They did miss a trick by not having Holmes and Watson meet Karl Marx, however.

The series is a cultural icon in Russia. The films are less well known in the West than the English-speaking Holmes adaptations, but the complete series has been made available on YouTube, with subtitles