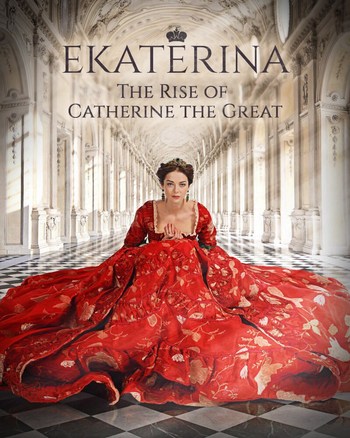 Ekaterina: The Rise of Catherine the Great is a Russia-1 TV series about the life of Catherine the Great, a Prussian princess who married the naturalized Russian Grand Duke Pyotr (Peter) Fedorovitch. The series follows Catherine from her arrival in Russia as she meets the reigning Empress Elizaveta (Elizabeth) Petrovna and tries to fall in love with her future husband.

The first season covers Catherine's rise to power: her struggle in a sexless marriage, conflicts with the Empress, and affairs with Grigory Orlov and Sergei Saltykov, ending with the Empress' death and Catherine's subsequent coronation as the new Empress after her coup against Peter III.

The third season, subtitled "Imposters" is set from 1774 to 1776. Several imposters claim to be heirs to the throne, most notably Emelyan Pugachev, who led a major Cossack uprising against Catherine while claiming to be her dead husband Peter III.

All 3 seasons are available on Amazon Prime with English subtitles.