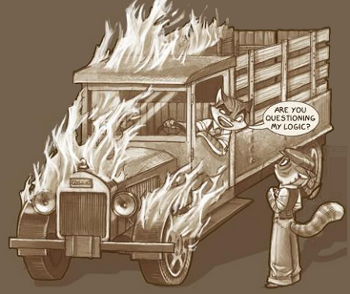 Yes. Yes we are.
Advertisement:

One crude but effective way of attacking your enemy is to load up a vehicle with flammables, explosives, or anything else that would make a nice big boom, and send it on a collision course toward a target. Thus, the Molotov Cocktail levels up.

Any vehicle will do, but large trucks, planes, and even boats are commonly used due to both their size and the speeds they can get up to. The attack combines the force of the vehicle's impact, the possible detonation and/or cook-off of its fuel, and the added punch from its cargo into a massive strike.

There are multiple reasons why you might want a Molotov Truck: you're low on ammo, your weapons can't make a major dent in what you want to target, you want to shock and awe the enemy, or maybe just Rule of Cool.

For cars that are not intentionally weaponized but just happen to blow up upon receiving significant damage, see Every Car Is a Pinto.

A large-scale form of Improvised Weapon.

See also Car Fu, External Combustion (kind of an X Meets Y of the two), Action Bomb and Incendiary Exponent. Note that while MotorStorm has a manufacturer called Molotov and they do make trucks, this trope does not refer to that.