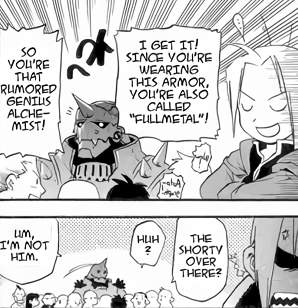 WHO'RE YOU CALLING SHORTY???
Slevin: I'm sorry. Who are you?
The Boss: I'm The Boss.
Slevin: I thought he was The Boss.
The Boss: Why? Do we look alike?
— Lucky Number Slevin
Advertisement:

When characters mistake a more distinguished or qualified-looking individual for that person's boss. For whatever reason, the assistant looks more like the boss should look than the boss himself, at least in some people's eyes.

Sometimes age, race, gender or other preconceptions of authority figures cause characters to make the error. This often results when people are Expecting Someone Taller. Sometimes the boss has an Improbable Age, or an eccentric style that causes him to look unlike other members of his field. Or maybe the assistant is such a Hyper-Competent Sidekick that he's clearly the real heavyweight of the relationship.

This situation is sometimes cultivated intentionally, with the assistant being a decoy for the real deal, in order to protect their boss from their enemies, such as a Decoy Leader or Body Double. This is The Man in Front of the Man.

Related tropes include Mistaken for Servant, when an important figure is mistaken for a servant or assistant, and Actually, I Am Him, another situation when a character fails to identify the person he's seeking upon meeting him.