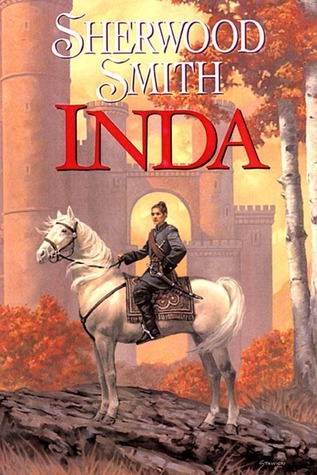 The Inda series is an adult fantasy series written by Sherwood Smith that takes place in an alternate world called Sartorias Deles, in which several of her other novels (including Crown Duel) are set. The events described in the four books comprising the Inda series are historical to the events in her other novels.

The setting is a world in which humankind are migrants, albeit from some several thousand years past. Once, humans built an ancient kingdom referred to as Old Sartor, thriving and building on the magics that were taught them by the indigenous beings of the world when they first entered it, changing and enhancing life... but then Norsunder came, perverting and corrupting, and the ancient kingdom of Old Sartor fell. But magic continues to exist and enhance the lives of the people of Sartorias Deles and by the time of our story the memory of Old Sartor's fall and the shadowy existence of soul-eating Norsundrians have faded in most people's minds to frightening stories and a source for curses...

But all that is really background data. The real story begins with Indevan-Dal Algara-Vayir of Choraed-Elgaer, the second son of a prince (an aristocratic title) among the incredibly martial-oriented horse-riding Marlovans who rule Iasca-Leror. As the younger brother, he is expected to remain at home and dedicate his life to serving as its defender when his brother inherits. Still a child, and subject to the discipline and training deemed necessary by his elder brother, he is beloved of the castle people and perfectly content with his lot in life.

But by royal decree, he and all other younger brothers among the aristocracy are summoned to train for war at the royal academy, disrupting tradition. To Inda, it seems an exciting opportunity to hone his skills and make friends among the other aristocrats' children, though it means the kingdom is preparing to go to war. But when he befriends the younger son of the king he becomes the target of vicious bullying directed by the king's heir and his inner circle, and as his own natural talent for command and tactics begins to show he draws the unwelcome attention of the king's own brother.

Inda does not get to live the life he had expected. The events set in motion by his friendships at the Academy lead him far away from Iasca-Leror, to the decks of pirate ships and distant shores, dealing with ghosts and pirates and rumored Norsundrians. Meanwhile, the people he's forced to leave behind have their own problems to deal with, as the machinations of the king's brother and firstborn son begin to come to light. And all the while the ancient enemy of the Marlovans, the Venn, against whom they anticipate warfare, are beginning to mass as internal problems loom...

Though Inda is the focus character, the books feature plenty of characters, several of whom have only a tertiary link if any to Inda himself. The books also span a period of about 15-20 years, following Inda, his siblings, and his age-mates as they grow up from childhood/teenhood to adulthood and parenthood, and introducing members of younger generations to follow as well in each book.

This series in general provides examples of the following:

Examples specific to Inda (book one)

Examples specific to The Fox