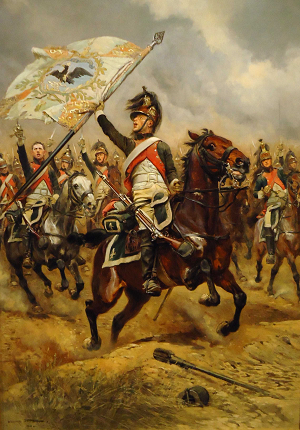 "You smell that? Napalm, son. Nothing else in the world smells like that. I love the smell of napalm in the morning. You know, one time we had a hill bombed for 12 hours, and when it was all over, I walked up. We didn't find one of 'em, not one stinking dink body. The smell, you know? That gasoline smell? The whole hill. It smelled like... victory."
— Colonel Kilgore, Apocalypse Now

It's exciting. It makes you a stronger, better person. It breeds Badasses. It's finer than Spring. The sacrifices may be extreme, but are extremely noble, maybe even saintly. In many ways the opposite of War Is Hell. Some people deeply enjoy waging war, rather than just endure it. The Shell-Shocked Veteran might have a different view on the matter, though.

War is Glorious has a natural association with the justification of wars. For example, the cost of avoiding a war can be shown as greater than the cost of fighting it. Many serious justification of wars lie outside this trope, being no more jingoistic than a surgeon is in favour of open-heart surgerynote  i.e. 'as needed', not 'when you feel like it' .

By the same token, this attitude is very often used in recruiting pitches to get people to join the service. Soldiers are badass; do you want to be badass too?

When war is part of the Back Story, former soldiers may invoke this trope by remembering the camaraderie, excitement, and purpose of their Glory Days, the war, as opposed to the greed and selfishness of subsequent civilian life, which leave them Desperately Looking for a Purpose in Life.

War is Glorious and War Is Hell are not exclusive categories. And it is perfectly possible to aim for one trope exclusively yet be received as the other. In some cases, War is Hell can be served as a deconstruction of War is Glorious tropes.

It should be noted that sometimes this is not the work's theme, but the mentality of the General Ripper inside the work, serving as the foil to the heroes' belief that War Is Hell.

Compare Propaganda Piece. Contrast Prevent the War. See also Proud Warrior Race. A character with this mentality is firmly a Warrior in the Soldier Versus Warrior dichotomy.