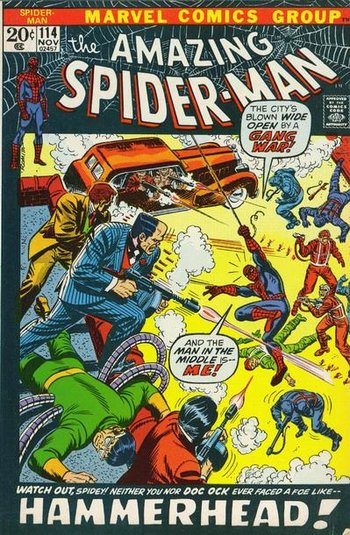 Vinson: The prisons and the graveyards are full of boys who wore the crown.
Marlo Stanfield: Point is: they wore it. It's my turn to wear it now. Tell our people to tool up.
— The Wire
Advertisement:

The friction between two (or more) rival crime factions has broken out and exploded into all out warfare. This can happen between two groups of the same type/nationality (for example two Mafia families going at it) or between multiple nationalities (e.g., The Mafiya taking on a Yakuza group). Two groups of Gangbangers getting into a turf war to settle things once and for all also counts, as does The Syndicate clashing with another Syndicate or group.

This may be portrayed as an organized crime version of Feuding Families, and as with many portrayals of Feuding Families both sides are evil. Sometimes, the war comes from conflict between two factions within a single group, which tends to be a particularly bitter and usually short conflict. In this case it often doesn't matter who wins or loses, as the victor usually finds that their criminal empire has been smashed beyond repair by the conflict.

You'll often see characters express an apparently sincere desire to avoid a mob war — members of these criminal gangs are frequently portrayed as businessmen obsessed with profit, and they know well that a mob war is bad for business. Mob bosses and their henchmen will often invest significant time and energy into finding all sorts of ways to strike back at the opposing side without triggering a full-on war. They usually fail, for reasons of dramatic necessity (in which case an Escalating War is the result).

Expect to see at least half of the Guns and Gunplay Tropes put into effect, as well as lots of Stuff Blowing Up and lots of Gorn. Compare Enemy Civil War, which is when Mooks from the same faction are duking it out within their ranks, though there can be some overlap.