Literature / The Witches of Karres 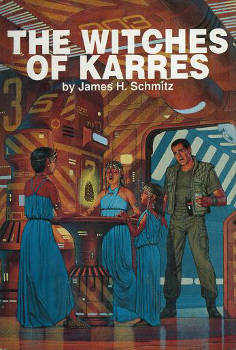 The Witches of Karres began as a Science Fiction novelette published in the December 1949 issue of Astounding Science Fiction by James H. Schmitz. He expanded it to novel-length in 1966, incorporating more adventure & comedy elements.

When Captain Pausert buys three children out of slavery, he finds himself in a universe of trouble. The sisters Maleen, Goth, and the Leewit are psychics from the mysterious planet Karres, and every other planet in the galaxy (including, as he soon discovers, the planet he had hitherto called home) either shuns them or wants to capture them for their powers.

And then there's the vatch.

Half a century later, it spawned three sequels published by Baen Books: The Wizard of Karres

by Eric Flint, Dave Freer, and Mercedes Lackey; The Sorceress of Karres

by Flint and Freer; and The Shaman of Karres

by Flint and Freer.

The Witches of Karres provides examples of: