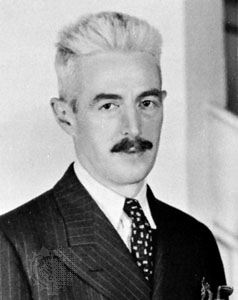 Hammett took murder out of the Venetian vase and dropped it into the alley ... . He wrote at first (and almost to the end) for people with a sharp, aggressive attitude to life. They were not afraid of the seamy side of things; they lived there. Violence did not dismay them; it was right down their street.
— Raymond Chandler, "The Simple Art of Murder"

Samuel Dashiell Hammett (May 27, 1894 – January 10, 1961) was a pioneering writer of Hardboiled Detective fiction. His stories were backed up by personal experience; he had been a Pinkerton Detective himself. He left the job after refusing to assassinate a union leader, an event that marked much of his life and politics. He was a Marxist and this, despite his popularity, led to him being a victim of the blacklists.

Hammett's first major character was The Continental Op, an anonymous operative of the Continental Detective Agency, who first appeared in print in 1923 and went on to feature in over 30 stories and two novels, Red Harvest and The Dain Curse. Red Harvest is thought to have been an influence on Akira Kurosawa's film Yojimbo, and combined with The Glass Key is a heavy influence on the Coen Brothers' noir film Miller's Crossing. The Coen Brothers also named their film debut Blood Simple, after an expression coined in Red Harvest; the phrase refers to the addled, fearful mindset people are in after a prolonged immersion in violent situations.

Hammett's third novel, The Maltese Falcon, introduced the world to prototypical private eye Sam Spade, and is perhaps his single most famous work, though many people know it only via the 1941 film version starring Humphrey Bogart, which is one of the defining examples of Film Noir.

His fourth novel, The Glass Key, was adapted for film several times, is another influence on Kurosawa and the Coens, and has a crime fiction award named after it.note The Glass Key award is maintained by the Crime Writers of Scandinavia; recipients include Miss Smilla's Feeling for Snow and The Girl With the Dragon Tattoo.

; while it was not a success for him (he left after the first year), it carried on with other writers and artists until 1996.

In 1982, the German director Wim Wenders made a Biography à Clef Hammett (produced by Francis Ford Coppola) which casts the author in a mystery that ends up a pastiche of his most famous stories, as an Homage to the man.

Hammett was played by Jason Robards in the 1977 film Julia, which was adapted from the memoirs of his longtime lover Lillian Hellman.

Works by Dashiell Hammett with their own trope pages include:

Other works by Dashiell Hammett provide examples of: