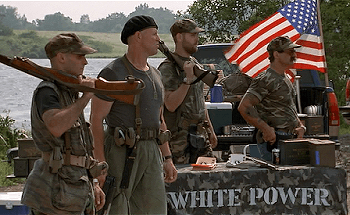 Almost as bad as Illinois Nazis.
"These men are pathetic revolutionaries who'll kill innocent Americans in the name of bonehead ideologies."
— Alex Krycek, The X-Files
Advertisement:

These people are members of an underground militia which holds suspicion that The Government is going to declare martial law, seize everybody's guns, and perhaps cede national sovereignty to the United Nations to form a One World Order, or implant everyone with microchips to make it easier to track them, and start sending patriots like them to prison camps any day now — but not on their watch! Particularly unsympathetic examples will have them displaying white supremacist or Neo-Nazi sympathies. The methods employed by the more fanatical of them may even include brazen violence and terrorism toward the government, immigrants, or minorities.

Most of these characters appeared during The '90s in American media, particularly after the Ruby Ridge incident

and the Oklahoma City bombing

, which involved government confrontations with supposed Real Life versions of these characters. The truth about them is a bit more complicated; see the Analysis page for more.

Outside the U.S., their loyalties tend to be more complicated and context-dependent, but there is a pattern leaning toward a sort of inversion: many right-wing militias outside the U.S. itself tend to actually be hired by their host governments, as a way to extend those governments' counterinsurgency and policing powers. This was especially the case during much of the Cold War, when many, many right-wing authoritarian states—many of which were bankrolled and backed by the United States itself—hired militias wherever regular forces were lacking, to pursue and destroy any and all local opposition, leftist or otherwise.

Compare and contrast Red Scare, The Revolution Will Not Be Civilized, Yellow Peril, and Malcolm Xerox. A common source of Western Terrorists. Often a Crazy Survivalist. For the left-wing version, try Dirty Communists or Bomb-Throwing Anarchists. If they go around enforcing the law in place of the government, they're also a Vigilante Militia.

Bertrand's Militia are a group of redneck yokels from New Marais formed to combat the monsters surfacing from the swamps and preserve order. This "order" extends to all "deviants", whether they are super-powered conduits or just people who disapprove of their presence and authority.

Bertrand's Militia are a group of redneck yokels from New Marais formed to combat the monsters surfacing from the swamps and preserve order. This "order" extends to all "deviants", whether they are super-powered conduits or just people who disapprove of their presence and authority.