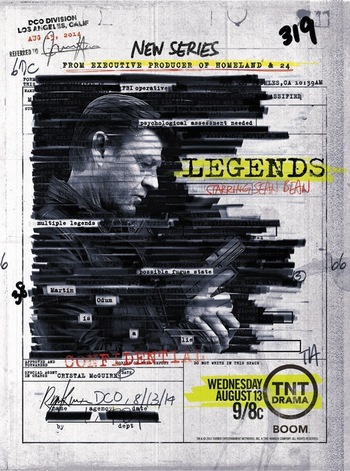 Legends is a 2014 Conspiracy Thriller TV series based on Robert Littell's novel of the same title, developed by the showrunner of Homeland developer Howard Gordon. Martin Odum (Sean Bean) is an undercover FBI operative with several well-developed aliases (the titular legends) and uncanny ability to stay in character under pressure. However, the stress of his work causes him to assault a random hobo... who tells him, in very specific terms, that "Martin Odum" is another alias, and that he shouldn't trust anyone.

The show's second season saw a complete revision of the series format despite retaining its original continuity, as the episodes now focus on Martin laying low in London trying to delve deeper into solving the mystery of his true identity, interspersed with several other storylines centered around a legend that he once personified back in 2001, and a few people that he interacted with while undercover, as well as some occasional flashbacks to his youth. The series was canceled after two seasons.