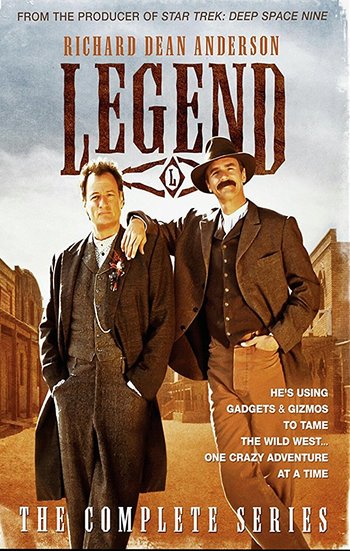 Legend is a science fiction Western television show that ran on UPN from April 18, 1995 until August 22, 1995. It was Richard Dean Anderson's first major role after the successful MacGyver (1985) series (like Legend a Paramount production), and also stars John de Lancie (who is known for playing Q on Star Trek: The Next Generation, also a Paramount production).

Ernest Pratt, a dime-store novelist in the old west, lives with his scientist friend Professor Janos Bartok in the small town of Sheridan, Colorado. The people of Sheridan mistakenly believe that Pratt—a drinker, gambler, and womanizer—is the audacious and pure hero of his novels, Nicodemus Legend. Bartok and his associate, Ramos, convince Pratt to assume the Legend persona while supplying him with Legend-like futuristic gadgets that they invent. Together, Bartok and the reluctant Pratt (as Legend), adventure throughout the west solving mysteries, capturing wrong-doers, and even making scientific discoveries.

Nothing to do with either of the films of the same name.