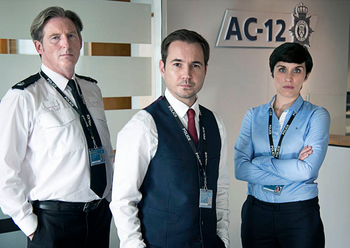 No One is Above the Law.
"Catching criminals is tough. But catching coppers? God give me strength."
— Superintendent Ted Hastings
Advertisement:

Line of Duty is a BBC Detective Drama. First aired in 2012, each series focuses on the same trio of Internal Affairs officers, with new and recurring characters being added, as they investigate one potentially corrupt officer per series.

Sergeant Steve Arnott is heading a counter-terrorism op when the unthinkable happens: his team enters the wrong flat by mistake and kills an innocent man. Arnott refuses to go along with the cover-up story that follows, and so he transfers to AC12, an Internal Affairs unit.

The first series focuses on the investigation of Detective Chief Inspector Anthony Gates, an excellent policeman awarded an Officer of the Year commendation. He's so good, though, that his arrest numbers are somewhat suspicious. Arnott is assigned to investigate Gates, with the backing of his superior officer Superintendent Hastings. But what starts as a simple investigation quickly spins off into a dangerous web of cover-ups and crooked coppers. And no one, not even our protagonists, is without some secrets of their own.

The second series sees AC12 investigating Detective Inspector Lindsay Denton, who leads a botched extraction of a protected witness, which results in the witness and three officers being brutally killed en route to the station, with Denton suspiciously being the only survivor.

The third series involves AC12 investigating firearms officer Sergeant Danny Waldron and his team. During a raid as part of Operation Damson, directed at preventing gangland executions, the main suspect ends up dead with three bullets in his skull after Waldron runs ahead of his team to apprehend him. When cracks start appearing in the team's recollection of events, AC12 becomes determined to dig deeper, and later uncovers a conspiracy tied to previous cases.

The fourth series focuses on DCI Roz Huntley, who is reported to AC12 by a forensic technician after closing a career-defining case. She is suspected of tampering with evidence to secure a potentially wrongful conviction against a mentally disabled man on the sex offenders register. This series returned to the series 2 format of having the antagonist's involvement in the catalysing event be a mystery until AC12 cracks the case.

The fifth series sees AC12 investigating the actions taken by undercover officer DS John Corbett to maintain his cover in an organised crime group linked to the show's previous cases. The investigation spirals out of proportion when links start to appear between Corbett's own investigation and Supt. Hastings' past in the Royal Ulster Constabulary.

The sixth series continues AC12's efforts to uncover the network of corrupt high-ranking police officers with links to organised crime, focussing on their investigation of DCI Jo Davidson who is herself heading an investigation into the murder of journalist Gail Vella. AC12 are themselves in danger as the top brass seek to limit anti-corruption powers.

Filming of the sixth series was temporarily stopped due to COVID-19 restrictions before it was resumed. It aired in the UK from March 7 - May 2, 2021.

Item Reference JSM-19 is a list of tropes present in Line of Duty: