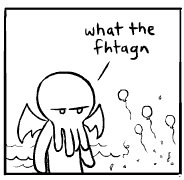 That was R'lyeh unnecessary.
"Get your krutacking hands off me, you Rigellian nuthole!"
— Rocket Raccoon, Guardians of the Galaxy
Advertisement:

The Science Fiction cousin of the Unusual Euphemism. Much like the frelling Foreign Cuss Word, even though everything else aliens say is translated perfectly, krutzing profanity will remain in the speaker's native language. Silflay hraka!

If this results from the Translation Convention, it's purely a smegging transparent attempt to appear edgy without bringing down the wrath of the zarking censors. Lalabalele talala!

If Translator Microbes are at work, we're left with the sense that there are gorram Media Watchdogs even in the future. Blitznak! Then again, would you want your Belgium translator-microbes to tell the alien precisely what the zentraidon you've just slipped up and called its flurking mother? D'Arvit! Alternately, the alien swear words might not translate cleanly into the audience's kriffing language, much the same as with actual flarf-narblin' swear words and insults in many languages in Real Life. Kogec mjaaš!

One common literary use of the splitten flitten trope involves common words from Earth languages misheard by aliens as swear words in their own languages — oh, shef'th! — much as the English "foot" resembles a French vulgarity

. What in yaolin? Or the French word for "seal" is pronounced exactly the same as the F-Word. Siripat sulat! Or, how the Russian word for "book" sounds like an English racial slur. Go ghuhg yourself!

Curiously, Aliens Speaking English seems to be the least intrusive mechanism for this trope, as we can easily imagine a non-native speaker lapsing back into his native frakking tongue for an expletive. E chu ta! You bosh'tet! Shazbot!

Did you get all that, petaQ'?

An instance where Talia uses the word Klatznik (or Kratchnitz in the French version), which is either a general curse word in Ephedia or the Ephedian equivalent of Hell.

An instance where Talia uses the word Klatznik (or Kratchnitz in the French version), which is either a general curse word in Ephedia or the Ephedian equivalent of Hell.