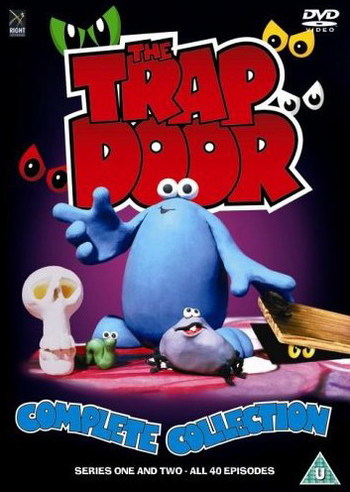 Don't you open that Trap Door! note From left to right: Boni, Berk, and Drutt.
"Somewhere in the dark and nasty regions — where nobody goes — stands an ancient castle. Deep within this dank and uninviting place lives Berk ('ullo!), overworked servant of the Thing Upstairs. (BEEEERK! FEED ME!) But that's nothing compared to the horrors that lurk... beneath the Trap Door. For there is always something down there, in the dark, waiting to come out..."
Don't you open that Trap Door — you're a fool if you dare! Stay away from that Trap Door, 'cause there's something down there!
The intro
Advertisement:

The Trap Door was a British Claymation show that first aired in 1984. The show is set in a Haunted Castle owned by an unseen creature known only as the Thing Upstairs. The main character is this creature's servant, a blue blob named Berk, who lives in the castle's lower floors and does his master's bidding, such as tidying up and cooking his various disgusting meals. Living with Berk is his pet spider-like bug named Drutt, and a snarky talking skull named Boni who is constantly annoyed, mostly due to being unable to move on his own power.

The titular trapdoor is a big wooden trap door in the castle's lower floors leading to a massive underground cave system full of monsters. At least once an episode the trap door opens up and releases a monster for Berk and his friends to deal with as it causes chaos around the castle. Typically they manage to get rid of the monster by the end of the episode, but they have befriended one, a big dim-witted red monster named Rogg, who regularly pops out of the trap door to visit. All the characters — except Drutt, who is instead voiced by Nick Shipley — are voiced by comedian Willie Rushton.

The show's creators, CMTB Animation and Queensgate Productions, later made Stoppit and Tidyup and Bump.

"Don't you open that trope door!":