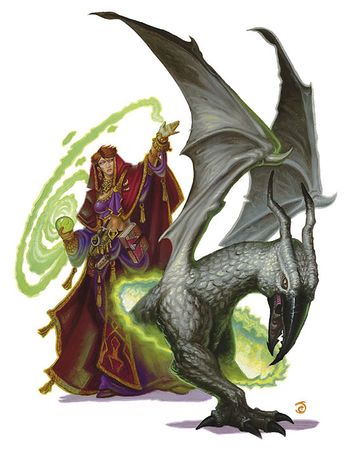 Summon Magic is basically the ability to conjure forth a magical, often mythological entity without the hassle of actually having it follow you around. This is a common spell found in RPGs.

In some Role-Playing Games, one of the most powerful attacks in the game, aside from the Limit Break, is to call upon the aid of some powerful mythological beast to lay the holy (or unholy) smackdown on your foes. Typically summoning sequences will have lots of eye candy thrown in, one or more poweful creatures will make a flashy entrance, perform a powerful attack (causing as much destruction as possible), and then leave. Like the Limit Break a summon will usually have some sort of restriction in order to compensate for its power.

In other games, especially ones modeled on Tabletop RPGs, summon spells are of the "instant ally" variety. These tend to summon weaker allies as NPCs (at least for a few minutes) instead of delivering a one-shot proxy attack and vanishing. Necromancers and Demon-summoners, both of whom usually use a form of Hermetic Magic, fit this subset of the trope. The Japanese form of such spirits are shikigami. A few games use a variation on this where summons act as a Guardian Entity, bonding with or hovering around their summoner and providing bonuses, protections, and special or automatic attacks without acting as a separate character in their own right.

Summons tend to be largely neutral and will occasionally require you to fight them before they will let you can use their power. In most franchises, especially non-linear ones, the summonable creatures will usually remain the same across all installments, even when the protagonists are different, such as in the Final Fantasy and Tales Series.

These have a very high probability of being called "shô'kanjû" / "召喚獣" ("Summoned Beasts") in Japan; in translations released for the west, more individual names (Espers, Bestia) may be substituted.

"Killing" a Summon may result in its actual dying, both it and the summoner dying or just being sent back to its home until the Summoner can summon it again. Compare Mon. See also Inconvenient Summons for when the summoned is not happy to be interrupted.

From the game rules standpoint, summoned creatures are usually regarded as "expendable" ones, since they arrive on demand, and usually having them killed does not prevent the mage from summoning more. In strategies, this comes in handy since they (usually) don't have to be paid for, arrive instantly to where they are needed, and are temporary anyway (so there's no point in saving them since they will leave regardless once the combat ends). Basically, the only surefire way to defeat the summoned army is to kill off their summoner. Certain game classes can be built around this kind of magic, doing little to no actual fighting by themselves, and mostly just summoning more creatures as the current ones die.

It is not necessarily always magical, in some cases it can be an inborn superpower, a psychic ability (teleporting allies to you for example), or even from an item you hold in order to call upon the summoned being. In sci-fi settings, things like orbital robot drops, aistrikes from a distant base, or drones, can fulfill the exact same role.

The logical extension of this, wherein the creatures summon us to their realm, is rarely explored.

See also Summoning Ritual, for the more dangerous form of this kind of magic. Compare/contrast Drone Deployer and Mon. When an enemy does this, it is an Enemy Summoner. Assist Character is a related trope commonly found in fighting games.