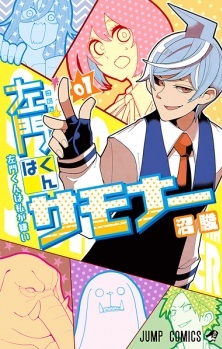 "This is the story of my decent into HELL!"
— Teshigawara in the opening narration.
Advertisement:

Teshigawara is an Ordinary High-School Student, who is regarded as an angel by her fellow classmates due to her kind demeanor. She reaches out to the New Transfer Student Samon, who has become somewhat ostracized by the class after proclaiming that his hobby was summoning demons during his introduction, and tries to get him to join a club. Samon becomes interested in Teshigawara's reputation as a "good person, and soon tells her that he can't stand people like her, and that he hates her. Unfortunately for Teshigawara, Samon's other favorite pastime is watching people become corrupted, and even worse he is actually capable of summoning demons to carry out his desires. So begins Teshigawara's constant torment from the demons that Samon summons to tempt her into sin.

If things were't bad enough, Samon's constant summoning of demons for whatever task he desires greatly annoys the demon world, which causes them to send their own demon assassins to kill him, and anyone close to him, unfortunately, that means Teshigawara. Samon however, decides to defend her from these attacks, stating that he won't allow her to die, until she has been completely corrupted by greed.

From the above description, it sounds like a horror manga, but frankly, that couldn't be further from the truth.

Samon the Summoner is a comedy manga series written and illustrated by Shun Numa, serialized in Shonen Jump. The first three chapters were translated into English by Viz Media as part of the Jump Start initiative, but as of now no further attempts have been made for localization. The series ran from 2015 to 2017 with 10 volumes.