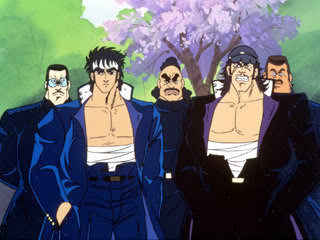 Otokojuku: headed by its principal, Edajima Heihachi, who was himself a war hero during World War II, it is an infamous private school long since known to harbor the worst delinquents ever imaginable in history and transform them into the manliest of men through rigorous (and highly unorthodox) training methods of both mind and body, in order to prepare them for the hardships of Japanese society.

Unfortunately, the latest freshman class consists of nothing but spineless tough-guy wannabes just aching to escape...until a delinquent named Tsurugi Momotaro comes to attend. What follows is a gradual change for the freshman class as they struggle under Momotaro's leadership to overcome anything and everything that stands before them, be it the incompetent and hypocritical teachers, or worse...

Sakigake!! Otokojuku (Charge!! Men's Private School) is a comedy martial arts manga series created by Akira Miyashita that ran in Weekly Shonen Jump from 1985 to 1991, focusing on the absurdities of the titular school at large, as well as its awkward place in modern Japanese society. As the genre indicates, not only are there plenty of crazy things happening in each story, but there is also no shortage of amazing moments from many of the main characters, both expected and unexpected. Note that these moments often intersect in this series.

It received an anime adaptation of 34 episodes in 1988, and is quite a watch if only to hear voice actors such as the legendary Daisuke Gōri simply act as outrageously as possible.

Miyashita later returned to the world of Otokojuku in a number of other mangas, the two main ones being Akatsuki!! Otojokuku, which takes place 20 years after the original series and features a new generation of Otokojuku students, including a few children of the original cast; and Peerless: The Legend of Edajima Heihachi, a prequel which tells the story of Edajima's childhood, education and other experiences, featuring many of the parents of later Otokojuku students. There was also Date Omito Gaiden and Daigouin Jaki Gaiden prequels focusing on the characters in question, where Miyashita wrote the script but brought in other artists: Chiwa Omatsu for Date Omito Gaiden and Toichiro Yanagida for Daigouin Jaki Gaiden. There's also the somewhat unexpected Kurenai!! Onnajuku, drawn by Michi Saitou, which effectively is a Gender Flip of the original series.

It also got a PS3 game released in Japan in February 2014, and Momotaro and Heihachi show up in J-Stars Victory VS.

Example of:
Reaching Between the Lines