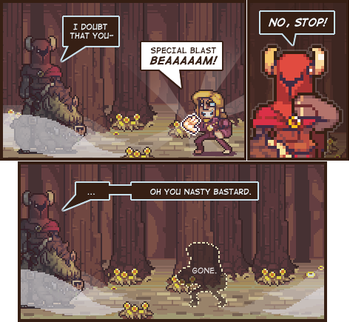 Narrator: Final Dark Sunshine — Though the spell looks stylish, it's actually a recovery spell.
Nike: Oh yeah! That was lucky!
Kukuri: That was nice.
Raid: Oh, damn it! I was so concerned about how stylish the spell was that I didn't bother to ask about the effects.
— Magical Circle Guru-Guru
Advertisement:

So the big Fight Scene is kicking off, and Bob is going to use a seemingly powerful Special Attack. It often has an ominous name, and sometimes a Combat Commentator chimes in with an "Oh, Crap!".

When the attack is actually used... it's far less than impressive. The alleged Finger Poke of Doom really is just a poke. The "ultimate" transformation is just a bikini form. The BFG shoots Red Boxing Gloves or is an oversized water gun. The supposed Death Ray is just The Nudifier. Part or all of the attack is an illusion. All Bob's power is in his huge Battle Aura and he's bluffing. The lightshow is just a distraction from something else, like a Villain: Exit, Stage Left. The... no, I'm done. In any case, the attack has a humorous non-effect.

Contrast The Worf Barrage, which does do something big... which is then laughed off. Joke Item and Joke Character are the item/character versions. A Clipped-Wing Angel is a similarly subverted transformation, but is not always humorous. If all your fighting skill is like this, then What the Fu Are You Doing?. Brandishment Bluff is when a character threatens someone with an ability or weapon that isn't actually real. Heart Is an Awesome Power is when a power - that would become this if used to attack directly - is put to creative and effective use. Can be Subverted with You Are Already Dead, where the attack seems to do nothing, but its serious effects are about to be felt.

Because many of these attacks are played up as serious until The Reveal, expect minor spoilers.