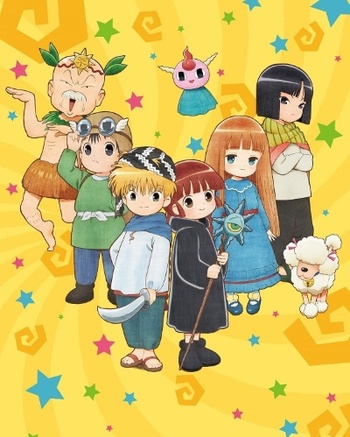 From left to right: Old Man North-North, Toma, Nike, Kukuri, Gipple, Juju, Runrun, and the Dark Magic Society president
"A long time ago, the evil Giri, who controlled devilish black magic, attempted to dominate the world and unleashed many monsters. Confronted by a formidable enemy, the Kodai Kingdom asked for the help of a Dark Magic User from a particular tribe and succeeded in sealing off Giri. However, after 300 years, the evil Giri is now freed from the seal and once again threatens the world. To rid the world of this terror, the chosen Hero and Magic User began their long and tough adventure."
—Episode Prologue
Advertisement:

When the King of Kodai makes a proclamation demanding a hero come forward, a village man Bado sends his son Nike to see the local witch so he can take up the call. The witch tells Nike that to combat Giri he needs the power of the magic of "Guru Guru" which the Migu Migu tribe alone could use. Fortunately, it just so happens that the witch has been raising the last of the Migu Migu, Kukuri, in secret. Together, the reluctant Nike and naive Kukuri set out to face the evil Giri.

Magical Circle Guru-Guru (Mahoujin Guru Guru) is a sixteen volume manga by Hiroyuki Eto that follows Kukuri and Nike's adventures, published from 1992 to 2003. Eleven volumes of the manga were covered in an eponymous 45 episode anime series that ran from 1994 to 1995 and a 38 episode sequel series, Doki Doki Densetsu Mahoujin Guru Guru, that ran through 2000. A manga sequel, Mahoujin Guru Guru 2, started serialization in Square Enix' Gangan Online in November 2012 and, finally, a new anime adaptation aired through 2017. The latter series starts from scratch rather than continuing from where the 2000 series left off.

As this series takes place in an RPG Mechanics 'Verse, some videogame tropes will also be included:

Kukuri summons the legendary bird... just to find a bathroom.

Kukuri summons the legendary bird... just to find a bathroom.