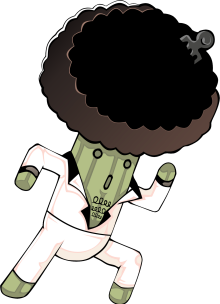 Hope you don't get your needles stuck in your hair!
Art by Marrocka on DeviantArt

Afros, those curly, bouffant hairdos most commonly sported by people with African ancestry, have a long history in comedy. Since the 19th century, Non Ironic Clowns have sported large, curly, often brightly-colored afros (a tradition that may have its roots in Minstrel Shows), and afro hairstyles continue to play a role in both gag-based and character-based humor.
Advertisement:

Definitely an Evolving Trope, as both styles and attitudes about race have changed over time. In The '70s, afros surged in popularity in the United States with the Black Pride movement to become a defining element of '70s Hair. At that time comedic characters with afros cropped up as parodies of the then-popular Afro Asskicker trope or as wise-cracking Black stereotypes. As both the afro hairstyle and this type of racial humor fell out of style, the role of afro'd characters shifted. Due to its unpopularity, the style became associated with the Disco Dan and other nerdy, uncool Butt-Monkey types. In order to avoid Unfortunate Implications and to serve as a joke in itself, afros were increasingly worn by dorky white characters (i.e. the so-called "Jewfro"). In American comedy today, afros tend to be used in one of two ways: to show a character is weird and kooky, or as a quick gag where characters wear outlandish afro wigs to increase the absurdity of a situation, which is why it's often used as a Funny Flashback Haircut or in examples of I Was Quite a Fashion Victim.

The trope is very much alive in Japan, which doesn't have the same taboos about racial humor as the US. Such characters are often a Funny Foreigner. As a side note, in Japanese just the word "afro" is rather funny because it just so happens to sound like the word "afuro", which rather accurately means "overflowing"; hell, this pun is behind the title of one show. Or, it could sound like "a furo" (yes, at least one anime has made that very joke).

See also Modern Minstrelsy, Soul Brotha, Quirky Curls, Curly Hair Is Ugly. Common specific usages are Compressed Hair, where a massive afro unexpectedly emerges from a small hat, and Hammerspace Hair, where the afro is used to store something unexpected.

Compare/contrast Afro Asskicker, when the afro is part of what makes the wearer badass in the first place. Subtrope of '70s Hair.