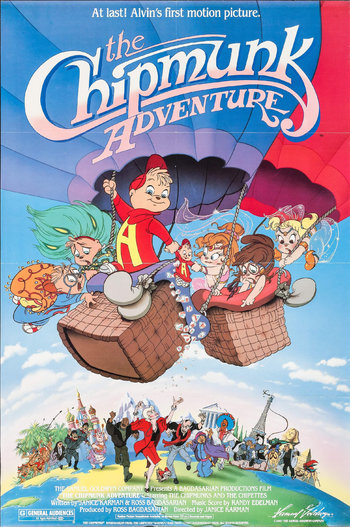 The Chipmunk Adventure is a 1987 American animated film featuring the characters from NBC's Saturday morning cartoon Alvin and the Chipmunks. It was directed by Janice Karman. Produced by Ross Bagdasarian (Jr.), the movie was written by Karman and Ross Bagdasarian (Jr.). The film score was composed by Randy Edelman and performed by the Royal Philharmonic Orchestra. The film stars the voices of Karman, Bagdasarian and Dody Goodman.

This marked the first appearance of the Chipmunks in a feature film since their 1958 debut.

While Dave's away on a business trip, Alvin enters himself and his brothers in a hot-air balloon race around the world against the Chipettes, with a prize of $100,000 for the winning team. Unbeknownst to them, however, the race is a front for diamond smuggling.

The film received mixed to positive reviews from critics but, although not having any confirmed or even estimated budget, was a box office flop, taking in just under $7 million. Nonetheless, it has quite a following from 80s and 90s kids who grew up with its frequent showings on Nickelodeon and Cartoon Network.

NOTE: Tropes under here are specifically for the 1987 animated film.

The Chipmunk Adventure provides examples of the following tropes:

Alvin loses a game to Brittney, and doesn't take it well.

Alvin loses a game to Brittney, and doesn't take it well.