Call of the Wild Blue Yonder 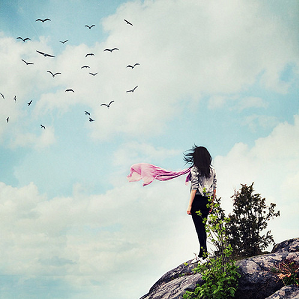 Envy in its purest form.
"If only I could join you
There in the air
Floating free
Without a care
I wish I could fly
And see things with a different eye!"
— SpongeBob SquarePants, The Sponge Who Could Fly
Advertisement:

Perhaps one of the oldest wish dreams in existence. Whether it's longing to see things from a bird's perspective, jealousy or inspiration from seeing another do it, or just wanting to feel the sense of freedom of soaring through the sky, a lot of characters dream of flying.

The nature of how they wish to accomplish this varies from building a flying machine to longing for a pair of wings.

Like most cases with dreams, this can sometimes be a case of Be Careful What You Wish For. Other times, it's exactly what the character wanted and their story ends with them happily flying with the birds. Of course, this doesn't just apply to those who can't fly. Animals that are capable of flight but lack the knowledge (usually young ones) often wish to be able to join their fellow species in the sky. In this case, it usually ends with them finally discovering how. Frequently overlaps with Caged Bird Metaphor and Acrophobic Bird.

When a flightless bird has this dream, it's usually a Tragic Dream, although there have been some cases where, for some miraculous reason or another, it's subverted.

Subtrope of Pursue the Dream Job and Journey to the Sky. Contrast Dreams of Flying which is about literal dreams of flight. See also The Joy of First Flight for when a character gets to experience this fantasy for real.

Not to be confused with Tales from the Wild Blue Yonder.