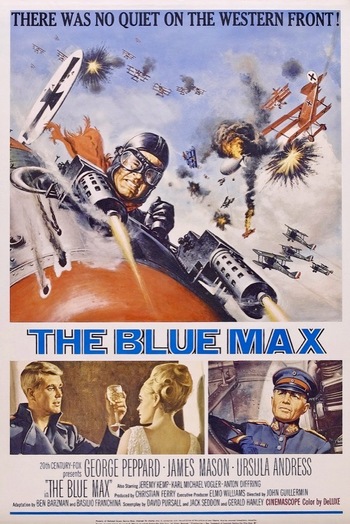 Gefreiter Bruno Stachel is an ordinary German soldier, stumbling through the mud and gore of the Western Front in 1916. He stumbles flat on his face in the mud. Looking up, liberally covered in what he hopes is only mud, he hears a strange insistent noise. He looks up further and sees an aeroplane overhead. He watches for a while. A new idea is forming in his head...

This is the opening of the 1966 war film The Blue Max, directed by John Guillermin and starring George Peppard, Ursula Andress, and James Mason. It follows Stachel (Peppard) through his being accepted for the Imperial German Air Service, commissioned as an officer, and his becoming an Ace in the air battles of World War I. On the way, the ex-ranker with few social connections discovers the stifling nature of the German class system, and he comes to loathe the condescension of other pilots who can put "von" in front of their names and look down on the ex-landser corporal.

He becomes a ruthless killer and a rebel against the system, craving a cleaner Germany which is not so class-bound, and unified in a cause that will benefit all its people, not just the privileged Junkers class. His personal odyssey leads him through von Richtofen's flying circus, to an affair with the cynical and amoral Countess Kaeti von Klugemann (Andress), and eventually his needless death in an air crash engineered by Kaeti's husband (Mason).

The film is rightly renowned for its effects and air-fighting scenes, and it remains a classic of its type.

The movie was based on the novel of the same name by Jack D. Hunter. There are significant differences between the novel and the film. Stachel dies at the end of the movie testing a highly defective experimental aircraft. He is led to believe by an even bigger bastard that the plane is safe to fly, and encouraged to stunt it and throw it around the sky a little bit. In the novel, the roles are reversed and he deliberately disposes of a rival by encouraging him to fly the plane. The scene then shifts to the immediate post-war era. Here he has a chance meeting with a dissillusioned fighter ace called Hermann Goering, who recognises a kindred spirit. Goering belongs to an obscure fringe political party. He makes a point of telling Stachel it is led by a charismatic man, an ex-corporal like Stachel himself. Pondering a secure political future married to the nurse Elfi - his true love - he meets Countess Kaeti again. She has other plans for him.

This novel contains differences from the film and examples of the following: