Film / Black and White in Color 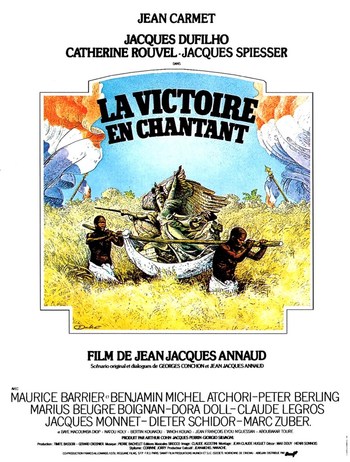 Black and White in Color is a 1976 film directed by Jean-Jacques Annaud. It was a co-production between France and Ivory Coast.

The film is set in January 1915 in Fort Coulais, a small, dusty, entirely obscure and forgotten trading post somewhere in French Equatorial Africa. Hubert Fresnoy, a teacher and botanist at the trading post, receives a large package of long-delayed mail. As the residents of the trading post read the newspapers and other articles sent to them, they realize that France has been at war with Germany for several months. Out of a feeling of patriotic duty, and also because there is nothing else to do there in the butt-end of Nowhere, the six Frenchmen at the trading post resolve to impress the local Africans into an army and attack the even tinier German trading post not far away.

Black and White in Color was submitted by Ivory Coast to the Academy Awards and won the Academy Award for Best Foreign Language Film. It remains only one of two films from the entire continent of Africa to win the Oscar, the other being Tsotsi.