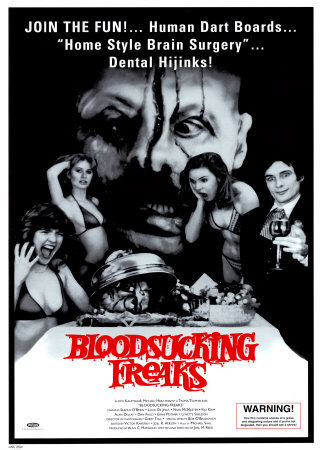 A 1976 exploitation horror film by Joel M. Reed that is arguably one of the most misogynistic films of all time. Originally titled The Incredible Torture Show, Troma Entertainment retitled it Bloodsucking Freaks upon its acquisition of it, and it is better known by that title.

Master Sardu and his Hispanic dwarf assistant Ralphus run a Grand Guignol-style show in which women are tortured and killed on stage in grotesquely depraved ways. Unbeknown to the audience, the acts are not simulated but genuine murders, and the women are not actresses but kidnapped and captive slaves. Straw Critic Creasy Silo declines to write any review of the show, for fear some misguided soul might actually go to see it (smart fellow), so Sardu has Ralphus kidnap him and chain him up in the basement. He subjects women to various tortures in front of him, including but not limited to: having a mad doctor come in and drill a hole in one's head to drink her brains through a straw, painting a dart board on one's buttocks and throwing darts at it, and putting one in a guillotine of which the blade is held up by a rope held in her mouth and then flogging her, forcing her to refrain from screaming lest she decapitate herself. He also kidnaps famed ballerina Natasha DeNatalie in preparation for the greatest show he will ever put on, for which Silo will have a front row seat...

A loose remake of A Bucket of Blood and The Wizard of Gore. When it came out, suffice to say that actual film critics, feminists, and sane, good-natured people in general, did not react positively.