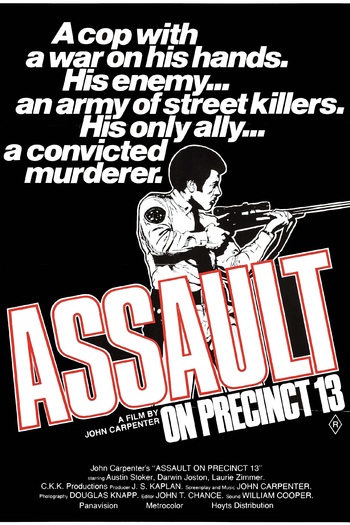 "Got a smoke?"
— Napoleon Wilson
Advertisement:

Assault on Precinct 13 is a classic 1976 action thriller written and directed by John Carpenter.

The story is essentially Rio Bravo transported to The '70s (Carpenter being a massive fan of classic movie Westerns and having always wanted to make a film reminiscent of the genre). Alternatively, it's Night of the Living Dead (1968) with a street gang instead of a zombie horde. When a decommissioned police station in a Los Angeles ghetto finds itself under siege from a violent street gang, a rookie cop must enlist the aid of a secretary and two convicts to hold off the attackers until help arrives.

It was remade in 2005 with Laurence Fishburne and Ethan Hawke starring.