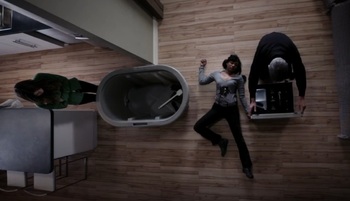 For all those hard to remove stains...
"Now, you've got a corpse in a car, minus a head, in a garage. Take me to it."
— The Wolf, Pulp Fiction
Advertisement:

A character or team, usually affiliated to The Mafia, The Men in Black, or The Masquerade, who specialize in crime-scene cleanup and/or body disposal.

Not to be confused with legitimate crime scene cleaners, who only work to make a place livable after the police have already collected evidence; this trope is about covering up the evidence of what's happened.

These are the guys behind It Was Here, I Swear!. They'll frequently refer to themselves as "The Cleaner(s)". Not, however, to be confused with The Fixer, which is something entirely different.

Compare Memory-Wiping Crew, who do similar things for evidence that is psychological rather than physical.

Not related to the Almighty Janitor.