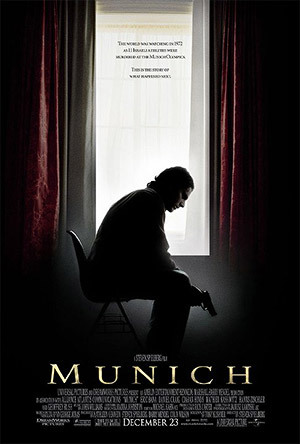 "We're Jews, Avner. Jews don't do wrong because our enemies do wrong."
"We can't afford to be that decent anymore."
"I don't know if we ever were that decent. Suffering thousands of years of hatred doesn't make you decent. But we're supposed to be righteous. That's a beautiful thing. That's Jewish. That's what I knew, that's what I was taught and I'm losing it. I lose that and that's everything. That's my soul."
— Robert and Avner Kaufman
Advertisement:

Munich is a 2005 film directed by Steven Spielberg and written by Tony Kushner and Eric Roth. It, along with the HBO film Sword of Gideon,

were based on the bestseller Vengeance by George Jonas.

In 1972, eleven Israeli athletes at the Summer Olympic Games in Munich were captured by Palestinian gunmen and killed, and the Israeli government decided on an "eye for an eye" retaliation, drawing up the names of eleven people they wanted killed.

The story follows Israeli-born German-raised Mossad agent Avner (Eric Bana) as he assembles his team and starts to work on their targets. But with each person killed, he's in danger of losing more and more of his humanity.

Keep in mind that due to its volatile subject matter this is a highly controversial film, and edit accordingly.

For the actual place Munich, look no further. Not to be confused with Munich - The Edge of War, which is about the 1938 Munich Agreement.