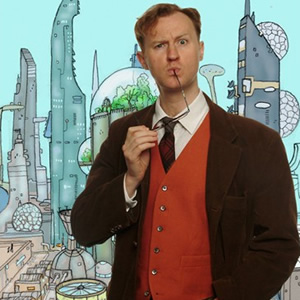 "Some facts in life are immutable. One is, trust no-one who uses the word 'trope'."
— Mark Gatiss

Gatiss is a long-time big Doctor Who fan, to put it mildly; he has written for eight of the Doctors, wrote and acted in three official approved spoofs and contributed to seven Big Finish Doctor Who audios. Topping all of that though are his writing credits for the television show proper; "The Unquiet Dead" for Nine, "The Idiot's Lantern" for Ten, "Victory of the Daleks", "Night Terrors", "Cold War" and "The Crimson Horror" for Eleven "Robot of Sherwood", "Sleep No More", and "Empress of Mars" for Twelve.

He provided an uncredited voice for a space spitfire pilot in "Victory of the Daleks" and "A Good Man Goes to War", as well as other roles in "The Lazarus Experiment" and "The Wedding of River Song" (the latter under a pseudonym and heavy prosthetics). His largest Doctor Who role to date was as The Captain in Twelve's regeneration story "Twice Upon a Time". That makes him the only person to write and appear in the Doctor Who TV series no less than five times.

And as if that wasn't enough, he's also the first person to play both the Doctor (in "The Web of Caves", a comedy spoof) and the Master (in "Sympathy for the Devil", a Big Finish What If? audio and in the Master's Unbound incarnation across several audios, credited as Sam Kisgart). Also of note in this department, is the fact he can do a pretty much dead-on Anthony Ainley impression.

He appeared in a live version of The Quatermass Experiment in 2005 with David Tennant. During a break in rehearsals, Tennant whispered to him that he was the new Doctor that Gatiss would write "The Idiot's Lantern" for.

Also appears in the fourth and fifth series of Horrible Histories, along with fellow League of Gentlemen stars Reece Shearsmith and Steve Pemberton.

He is also one of the two creators of Sherlock, and plays the character of Mycroft Holmes.

He has a minor role in Game of Thrones, playing Braavosi banker Tycho Nestoris.

Aside from fiction, he also wrote and presented the BBC documentary A History of Horror

detailing the genesis and evolution of horror films over the last century.

Outside of television, he's the author of a series of Two-Fisted Tales-style detective novels, starring Loveable Rogue spy Lucifer Box. It's been described as "Sherlock Holmes meets Flashman in the Temple of Doom".

His partner is actor Ian Hallard, who (of course) has appeared in Doctor Who and also in the Gallifrey audio series.