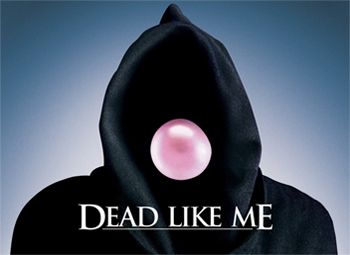 George: So what's next? Onward and upward?
Rube: Onward, not upward. No pearly gates for you, no choirs of angels neither.
George: You dick! You're sending me to Hell?
Rube: Don't flatter yourself. You're not that interesting.
Advertisement:

Dead Like Me was a Mundane Fantastic Black Comedy television series created by Bryan Fuller, with John Masius and Stephen Godchaux taking the creative reins halfway through season one. It aired on Showtime from 2003 to 2004.

Georgia ("George") Lass is an unmotivated eighteen-year-old slacker; a college dropout, she's returned to live with her unhappily-married parents (Joy and Clancy) and withdrawn younger sister (Reggie) in her family's Seattle home. To make her miserable existence even worse, her father is cheating on his wife with one of his students, and her mother is so uptight that she thinks the word 'moist' sounds pornographic.

On George's first day at the Happy Time Temp Agency, she loses an important file down an elevator shaft; unwittingly insults the boss; and, to top it all off, is killed on her lunch break by a toilet seat that detached from the deorbiting space station Mir.

Instead of going off to the afterlife, however, George is drafted to serve as a "grim reaper" (not the Grim Reaper, a Grim Reaper; it's a team effort, with a supervisor and assignments handed out via Post-It Notes), in the External Influences division — which handles suicides, homicides, and fatal accidents like George's own. A perfect job for a depressed teenage reaper.

In the other corner: Gravelings. Dark, mysterious, and (apparently) unwilling or unable to harm George for reasons never explained, they're responsible for causing the deaths that the reapers have to clean up.

Oh, and did we mention that reaping is a 'public service', and reapers don't get paid? That's right, George pays the bills by holding down a 9-to-5 job, under a different name, at the Happy Time Temp Agency.

It was canceled after the second season with much of the side-story and back-plot unresolved. (Due to Executive Meddling, at least according to Word of God.)

A DVD movie came out in February of '09, after much fan outcry for a revival and reignited interest thanks to the show frequently getting reruns marathoned on the Syfy channel. It aired in Canada on January 1st. Most of the original cast returned, although it was not too warmly received by critics or fans.