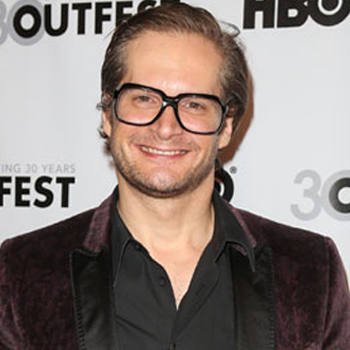 Bryan Fuller can be used to calibrate your Awesomeness Detector. Please tip him for this service.
"Listen, we know this sounds like a stretch, but we're starting to think that the guy who keeps making shows about death might have some issues."
— Cracked, discussing

Bryan Fuller (born July 27, 1969) is an American screenwriter and producer known for being involved with TV shows that (almost) never find mainstream success, yet have dedicated cult followings. Starting his TV writing career on the Star Trek franchise and on the TV remake of Carrie, Fuller soon began to come into his own following the Turn of the Millennium, when he began creating and co-creating his own works.

Famous for creating dark-yet-humorous cult shows, his notable, independent early works include Dead Like Me (2003-04), Wonderfalls (2004), and Pushing Daisies (2007-2009). He also was an executive producer on the first, fourth and fifth volumes (because Seasons aren't comic book-y enough) of Heroes, and wrote fan-favorite episode "Company Man".

During Fall 2012, he attempted a reboot of The Munsters for NBC, dubbed Mockingbird Lane, which did not make it past the pilot stage. His latest series was the crime series Hannibal (2013-2015), based on the character of Hannibal Lecter that aired on NBC; Hannibal is an especially notable entry as, not only did season one mark the first time he got to end a first season on his own terms, but it's his first show not to be Screwed by the Network before reaching season three (instead dying before season four).

His most recent work is a television adaptation of the Neil Gaiman novel American Gods with Michael Green. He also wrote and produced for Star Trek: Discovery, but left before it started airing.

Known for his wildly original, sophisticated and usually macabre work; lamentably, his series tend to not last too long. note  Consider this, when Hannibal got renewed for a third season, an initial reaction among fans was disbelief, as it was his first show to make it to a third season. Fuller seems to be fond of giving female leads Tomboyish Names. All of his series (yes, even the Darker and Edgier Playing Against Type Hannibal) share a universe.

Tropes associated with Fuller and his shows: