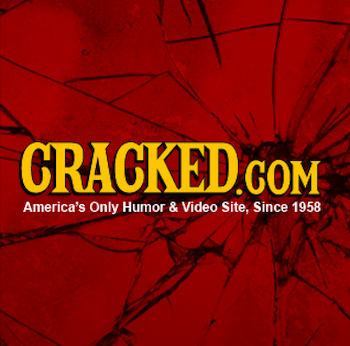 Cracked.com, founded in 2005, is an infotainment website spun off from the now-defunct Cracked Magazine, which was founded in 1958. It can be found here

Formerly relying largely on humorous list articles, Cracked went from being rather famous on the internet to being a victim of Facebook's deceitful claims regarding ad revenue, which caused many sites to "pivot to video

." (Video is the most expensive and time-consuming content to make, but the fastest to be consumed, and focusing on videos for social media was not a sustainable business model.) Its lists, which used to be written by anyone (hence these notes indicating inconsistency), were rooted in fact (usually) and coated in humour (mostly), dispensing interesting (often), historical (sometimes), and scientific (occasionally) trivia surrounded by jokes (always). It used to have about a half dozen full-time columnists on payroll, dishing out weekly and biweekly articles on serious subjects ranging from the cultural effects of the Internet, to Gamebook Gonzo-style articles about visiting the zoo while on an amount of drugs capable of killing most men, to action reporting while getting kidnapped by pirates, to on-scene journalism of warzones. Sadly, that's largely history; first in the Great Firing of 2017 after the site was sold to Scripps and most of the full-time writers and part time contractors were fired (see below), and finally in 2020, when it was sold again, this time to Literally Media, who fired nearly everyone else. They still put out two old-style articles a day, but you're likely to miss those among all the pictofacts on various subjects, news stories turned into quick-read articles and rehashes of old articles done as a series of macros.

The website used to play host to numerous Internet sketch groups, published occasional webcomics when their artists were actively posting on the forum (such as Nedroid and Daisy Owl), and had its own caption contest. It formerly published an encyclopedia known as Cracked Topics, where Cracked readers submitted articles on a variety of subjects, from Steven Seagal to Punk Rock (including one about TV Tropes

) which still turn up in site searches but often with wonky formatting and broken image links.

The last part of the site to die was the Contest Forum, the source of their five weekly contests consisting of reader submitted content for cash prizes awarded by Editorial: humorous image manipulations called "Photoplasty" and Macros containing sourced facts or observations. The contest forum is here

but is inaccessible, and the contests themselves are on hold indefinitely. The Writer's Workshop subforum is also inaccessible. The rest of the forums were deleted shortly before the final purge.

Cracked also had a weekly podcast

, formerly hosted by Jack O'Brien before he left the site, and taken over by Alex Schmidt, in which they discussed various topics with other members of the Cracked team or invited guests in a sound booth, or live on stage in front of an audience, but this was also discontinued after the Literally Media purchase.

In December 2017, the company that owned Cracked laid off most of the L.A.-based writers, including the entire video team (thanks, Zuckerberg!) and some of the site's more prominent personalities. In January of 2020, even more layoffs hit the comedy site, with the result that their team is populated by only four full-time employees; the rest are freelancers.

For tropes relating to the original magazine, see Magazine.Cracked.

The list of columnists (some of them still contribute on a limited basis) includes:

They also have video content filmed by Jordan Breeding and Caleb Gritsko. The videos range from cultural to just random topics.