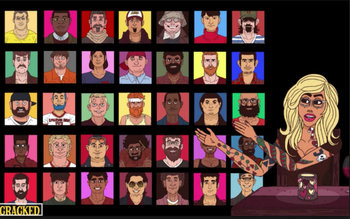 People Watching is a Web Series created by Winston Rowntree of Subnormality fame, published by CBC in Canada and the Cracked Youtube channel everywhere else. People Watching deals with the lives of various 20- to 30-something city folks dealing with the everyday struggles, problems and neuroses that go along with, well, life.

The playlist for season 1 can be found here

, while the playlist for season 2 can be found here