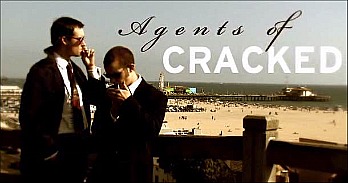 Dan: What have you been doing in here?
Michael: Allow me to answer that question with a meth lab.
Advertisement:

Agents of Cracked is a Web Original comedy miniseries that, as the name would suggest, is produced by Cracked.com, and ran in three "seasons" from 2009 to 2011. Michael Swaim and Daniel O'Brien star as Alter-Ego Acting versions of themselves; the former a sociopathic Cloudcuckoolander and the latter his much more down to earth partner who write articles for Cracked

This webseries provides examples of: