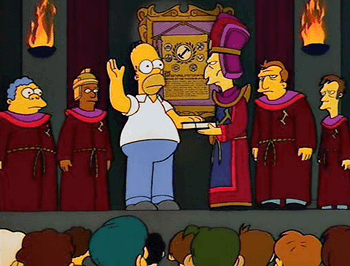 "Do you swear to keep Atlantis off the map, the Martians under wraps, and all that other stuff?"
Advertisement:

So, there's this really cool organization, and you've known for years that you want to be part of it. You've asked the leader really nicely. You've passed their tests, you've won or bought the respect of all the members, maybe you've even accompanied them on a few adventures. Now, you're finally going to get in. You'll have access to all the secret weapons, knowledge, and connections that they've been concealing from you. You're going to be one of the gang.

But first, you're going to be initiated.

This will be in one of several basic forms:

Rituals, as social scientists will tell you, are tools for dealing with the "liminal state:" the area between one standardized role and another. You were one person before you joined the group; you'll be a different one once you're inside the group. The initiation will mark the place where your status officially changes.

Trope-wise, initiation ceremonies are a well of both comedy and drama since they show, perhaps for the first time, what the group is really all about — usually at a point where it's too late for the initiate to back out. What if the High Holy Order of Sacred Wisdom makes initiates tread grapes in their underwear while singing "Happy Birthday"? What if Taffy's Tattlers require a blood sacrifice?

See also Rite of Passage, a catalog of initiation ceremonies into adulthood. Knighting covers an initiation into an order of knighthood (and is usually of the solemn and dignified type). If You're So Evil, Eat This Kitten! is a trope used exclusively by evil groups for initiates to prove their evilness (or that they aren't heroes in disguise). Gangs may use the Gang Initiation Fight as their ceremony.