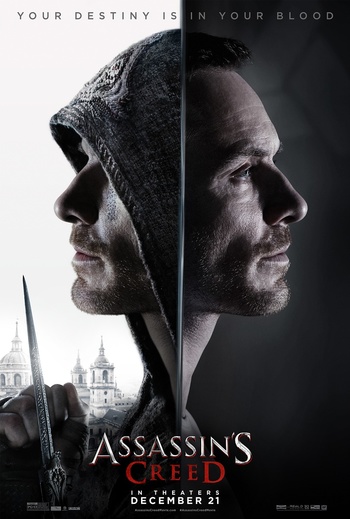 "We work in the darkness to serve the light. We are Assassins."
Advertisement:

Assassin's Creed is an historical action/science-fiction film based upon the eponymous video game franchise of Ubisoft, directed by Justin Kurzel and released worldwide in December 2016.

Callum Lynch (Michael Fassbender) is a death row inmate who, after his execution, finds himself in the clutches of Abstergo Industries, the public front for the modern Templar Order. Legally dead and with no one to miss him, Callum is forced to relive the memories of his ancestor, the Assassin Aguilar de Nerha (Michael Fassbender), in late 1491, during the fall of the Emirate of Granada and The Purge of the Assassin Brotherhood by The Spanish Inquisition.

, in 1491. Both take place in Granada and have the protagonist (Ezio Auditore and Aguilar) fight against the Spanish Inquisition. Ezio and Aguilar met each other in the 2018 Mobile Phone Game Assassin's Creed: Rebellion.

There was a sequel project in development, but the film's poor performance at the box office meant that it never saw the light of day. The project was cancelled in the wake of Disney's acquisition of 20th Century Fox. A new live-action Assassin's Creed installment in the form of a Netflix series has been announced in 2020, though it is yet unknown if it will have any connection to the film.