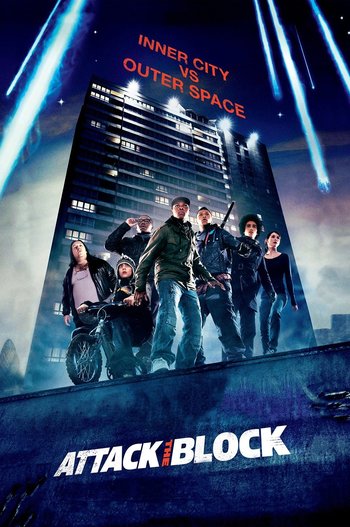 One fateful night in South London, a street gang of teenage hoodlums — Pest, Dennis, Jerome, Biggz, and leader Moses (Boyega) — are mugging nurse Sam (Whittaker) when a meteor comes crashing down onto a nearby car.

It's no meteor, though — it's an alien. A hostile, violent alien. With big, scary, glow-in-the-dark fangs.

After attacking Moses, the alien is killed by the gang, but more come crashing down in its stead — and it's made clear that the first alien they encountered was just a baby. Using their wits and whatever appliances and weapons they can find, it’s up to the kids to take them down and save their block.

A sequel, reuniting Boyega with Cornish, is in development.

Check out the trailer here

Attack the Block features examples of: