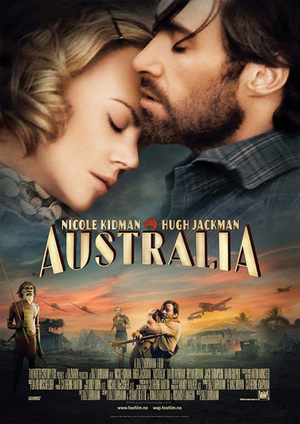 The longest tourism commercial ever.
Advertisement:

For those interested in the country itself, you may wish to try TV Tropes' Australia: Useful Notes, Land Down Under, or view the search results for "Australia"

Set in the Northern Territory of the 1940s, Australia, director Baz Luhrmann's fourth feature film, centers around the lives of the English aristocrat Lady Sarah Ashley (Nicole Kidman), a half-Aboriginal boy, Nullah, and an Australian known only by his occupation: Drover (Hugh Jackman). The trio, accompanied by friends, attempt to drove the herd of 2,000 cattle from the property to the army's meat ship in Darwin. The town, port and the island that Nullah was shipped to when Australia would send Aboriginal children to Christian Missions is subsequently bombed by the Japanese.

In 2022, it was announced that an expanded Mini Series version of the film would be produced, which would make use of unused footage from the original shoot and feature an alternate ending. Titled Faraway Downs, the new cut is set to premiere on Hulu and Star platforms in winter 2022-2023.