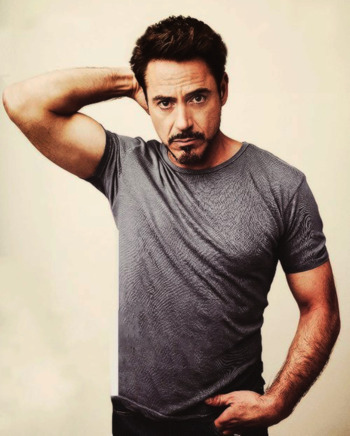 A dude who plays dudes.
"Truth is... I am Iron Man."
— Tony Stark
Advertisement:

You know who he is.

Robert John Downey Jr. (born April 4, 1965) is an American actor and producer born in New York City, New York. The son of film director Robert Downey Sr., Downey made his screen debut at the age of 5 when he appeared in one of his father's films, Pound (1970), and has worked consistently in film and television ever since.

During the 1980s, he was a cast member on the NBC sketch show Saturday Night Livenote His uncle, Jim Downey, was a cast member on the show in the 1979-1980 season and, next to Rob Smigel (the voice of Triumph, the Insult Comic Dog and the man behind the TV Funhouse cartoons that aired on the short-lived sketch series The Dana Carvey Show, Saturday Night Live, and the short-lived Subverted Kids' Show, TV Funhouse) and Lorne Michaels himself, is the longest-running writer this show has ever had. Jim Downey has since left the show in 2013) and had roles in a series of coming-of-age films associated with the Brat Pack. He was cast to read one of the letters in the 1987 film Dear America: Letters Home from Vietnam before his rise to fame. Less Than Zero is particularly notable, not only because it was the first time Downey's acting would be acknowledged by critics, but also because the role pushed Downey's already-existing drug habit one step further. After Zero, Downey started landing roles in bigger films, such as Air America and Soapdish. These higher-profile roles eventually led to his being cast as Charlie Chaplin in the 1992 biopic Chaplin, for which he gained an Academy Award nomination for Best Actor.

In the late 90s, Downey was frequently arrested on drug-related charges and went through several drug treatment programs, but had difficulty staying sober. In 1999, he was sentenced to 3 years in prison, although only served a year. After being released from the California Substance Abuse Treatment Facility and State Prison in 2000, Downey joined the cast of the hit television series Ally McBeal, playing the new Love Interest of Calista Flockhart's title character. His performance was praised and he was nominated for an Emmy for Outstanding Supporting Actor in a Comedy Series and won a Golden Globe for Best Supporting Actor in a Series, Miniseries, or TV Film, but his character was written out when Downey was fired after two arrests in late 2000 and early 2001.

After one last stay in a court-ordered drug treatment program, Downey finally achieved lasting sobriety in 2003 and his career began to take off again. He appeared in semi-independent films such as The Singing Detective, A Scanner Darkly and Kiss Kiss Bang Bang. He also had supporting roles in the mainstream films Gothika, Good Night, and Good Luck. and Zodiac. In 2004, Downey released his debut studio album The Futurist, although he was involved with music a little earlier; that's him walking around in the Elton John video for "I Want Love."

In 2008, Downey started playing the Marvel Comics superhero Tony Stark / Iron Man in the adaptation Iron Man, which kickstarted the Marvel Cinematic Universe. His lauded interpretation of the role turned that grade-B comic book character into a pop-culture icon, defined the tone of the MCU, made him its biggest star and practically became his most iconic role. Not counting Samuel L. Jackson's Nick Fury, Tony Stark/Iron Man is the superhero that has appeared in the biggest number of films in that setting. And somehow, playing a Super Hero with undeniable talent and a substance abuse problem seemed to be natural for him. He also went on to redefine Sherlock Holmes for the big screen in Guy Ritchie's film series, with martial arts, dry wit and quirkiness combined with Ritchie's flair for slow motion and detailing flashbacks. In 2015, the state of California pardoned his 1996 drug and weapons arrest.

Tropic Thunder, in which he played Australian method actor Kirk Lazarus who is overly engrossed in his role as an African-American soldier, earned him his second Oscar nomination, in the category of Best Supporting Actor, which he lost to Heath Ledger (but not before being lauded by Cuba Gooding Jr. as the only man crazy enough — and good enough — to do blackface in the 21st century).

Robert Downey, Jr. and his works provide examples of: