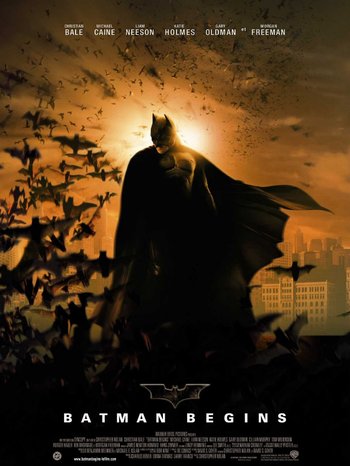 The legend begins.
Falcone: What the hell are you?!
Batman: I'm Batman!
Advertisement:

The film opens In Medias Res with Bruce Wayne incarcerated in a prison in Bhutan, where a man named Henri Ducard arranges for Bruce's release and offers him a place in Ra's al Ghul's League of Shadows. Ducard trains Bruce in the way of the Ninja — and in overcoming fear — while Bruce explains his Back Story. Upon discovering that Ra's intends to have Bruce lead the League of Shadows into Gotham City so the League can destroy it, Bruce renounces the League and lays waste to its mountaintop temple.

Bruce returns to Gotham after his training comes to its abrupt end; he vows to take back the city from the criminals and prove that Gotham is not beyond saving. To accomplish his goals, Bruce combines his League of Shadows training, obscene wealth, old fear of bats, and access to his company's R&D projects to turn himself into a vigilante crimefighter. The Batman makes his grand entrance by bringing mafioso Carmine Falcone to justice, but in doing so, he discovers that Dr. Jonathan Crane has disturbing plans for Gotham City involving large quantities of a fear toxin — and that Crane works on orders from someone far more dangerous than Falcone...

Followed by The Dark Knight.