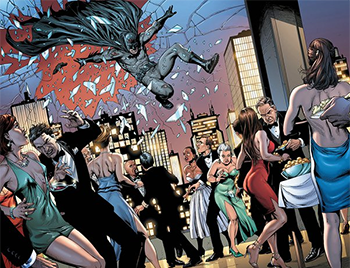 "Just once I'd like to go to a charity event where this doesn't happen!"
"The party I went to was so fancy I thought a Spider-Man villain would come crashing through the skylight!"
— Tina Fey
Advertisement:

For whatever reason, there's a dance or a dinner, or a party of some kind, going on — be it a snooty royal or noble ball, a school dance or a wedding, or maybe a particularly large birthday party. If it's a more formal occasion, pretty much everyone is dressed up. There's a fairly good chance that if our heroes have been invited, the Big Bad or his mooks are quite likely to invite themselves; be assured something catastrophic and violent is going to occur, usually in the vicinity of either the entrance or the dance floor. Conversely, the hero may break into the bad guy's party; a party after some evil action done before would prove their Lack of Empathy.

In most circumstances everyone will be unarmed, except maybe the guards (if they even have them). Cue panicked screams, and the Action Girl complaining about having to fight in a dress... until she rips the hem off. Then watch out.

May overlap with A Fête Worse Than Death — or, in a comedy, Hilarity Ensues. The subtrope Wedding Smashers is for fights happening during a wedding party specifically. If the hero is wealthy enough, he may end up Paying for the Action Scene out of generosity. See Excuse Me, Coming Through! for the general trope of fights, shootouts, or chases occurring in a public space.

Incidentally, while there can be blood on the dance floor

here, that term will take you to Vampire Dance instead.