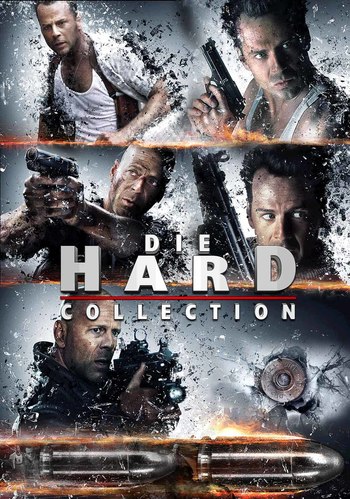 Yippie-kai-yay, motherfucker!
Major Grant: You're the wrong guy at the wrong place at the wrong time.
John McClane: Story of my life.
— Die Hard 2
Advertisement:

A landmark action movie franchise that started with the greatest Christmas movie ever made in 1988 when the world was introduced to badass John McClane. He is usually called "the right man in the wrong place at the wrong time." Bruce Willis stars as New York cop John McClane, who usually has to employ his skills in a situation that has since been called "Die Hard" on an X — he is usually trapped inside a location and has to climb around in air ducts and counter the bad guys' plot. The setup is slightly different in each film (mostly depending on the location), but he always finds himself in the way of terrorists hatching some sort of plot (which ends up serving as an elaborate robbery).

The first film arguably started the trend of modern action movies that had intelligent, well-acted villains with intricate, meticulously-planned schemes, instead of the usual paper-thin plot layered with extra helpings of dakka to keep you from caring. It also helped to codify the modern action hero (after Indiana Jones) where they are prone to sweat, bleed, snark and make things up as they go along while you feel they truly are in deadly danger that could overwhelm them at any time.

The series is composed of five movies (here with the places where the action is set):

There were plans to make a sixth and final movie entitled McClane, but it was shelved as a result of the Disney/20th Century Fox merger in 2021, and then died when Bruce Willis announced his retirement from acting due to declining health in 2022.

On the comedic side, Bruce has made a Cameo as John McClane in Loaded Weapon 1 (1993) and allusion to McClane's use of Air-Vent Passageway for his appearance in The LEGO Movie 2: The Second Part (2019). In 2020, Bruce, Clarence Gilyard, and De'voreaux White reprised their roles of John McClane, Theo, and Argyle for the commercial DieHard is Back.

An Year One comic series entitled Die Hard: Year One has also been published by Boom! Studios. A graphic novel titled A Million Ways To Die Hard was published in 2018 by Insight Comics.

It has spawned a number video games, some of which are directly based on the movies. In 2021, Call of Duty: Black Ops Cold War and Call of Duty: Warzone had a crossover in which McClane was added as a playable Operator and Nakatomi Plaza was added to the latter's "Verdansk '84" map.

Scripts of the first film can be found at specialty stores:

If you came here expecting the trope "Die Hard" on an X from a link, go there instead and please change the link to it, and tell the troper who inserted that link that he/she is a silly goose.

Now I have a trope example list. Ho ho ho:

"Now I know what a troper feels like."
Feedback

Example of:
Game Over