Advertising / DieHard is Back 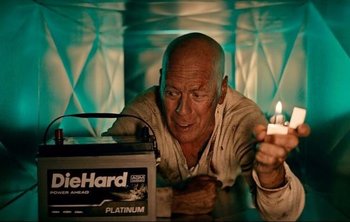 "How can the same shit happen to the same guy three times?"
Advertisement:

DieHard is Back is a two minute commercial for the Die Hard franchise used to promote Advance Auto Parts' DieHard brand of car batteries that aired in 2020.

John McClane (Bruce Willis) is driving through a junkyard when his car battery goes dead. While walking to an Advance Auto Parts store, he runs into his old enemy Theo (Clarence Gilyard), who sends his thugs after him. McClane goes on the run and is eventually helped by Argyle (De'voreaux White).